Thank you for visiting our Archive Page. Since APTA's Creation in 1921, Massachusetts has played an active role in moving our profession forward. Below you'll find a sample of our chapter history segmented by decade and insight into the milestones we have reached as a Community.

If you have something to add, please let us know! President Mary McMillan made a plea to practice under the State Board of Medicine, but no one supported her in her quest 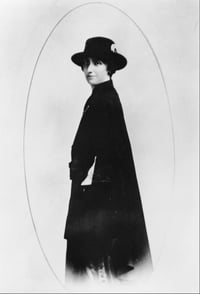 "No one was surprised but McMillan herself. In her inaugural message to the organization, McMillan promised to do everything in her power “to live up to the trust and confidence” bestowed upon her by those who elected her. That year membership stood at 274 from 32 states." 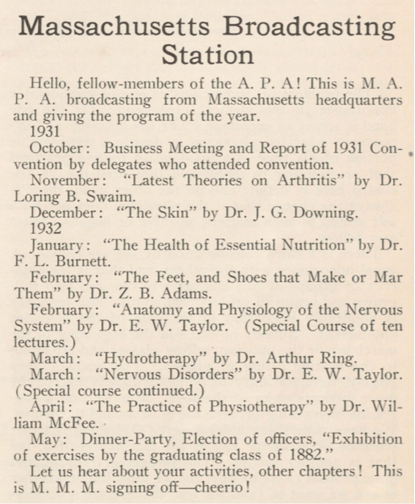 1936: The first Massachusetts Clinic for "Crippled Children"under the provision of the Social Security Act was held in Pittsfield, MA.

In 1943, at the request of the Emergency Medical Division of the Civilian Defense of Massachusetts, 17 women from the Massachusetts Physiotherapy Association were chosen to receive further training in gas decontamination work

Serving where needed: October 1944: 3 physical therapists from MA left the state to go serve in areas of the country with large numbers of cases of poliomyelitis. Boston Sargent College sent 7 senior students to practice under the supervision of graduate physical therapists

“Now, Therefore, I, Harry S. Truman, President of the United States of America, do hereby declare the week beginning June 2, 1945, as National Rehabilitation Week. I urge all churches, educational institutions, health and welfare services, civic organizations, chambers of commerce, boards of trade, industry, labor, public-spirited citizens, radio, and the press throughout the United States to observe National Rehabilitation Week, to the end that handicapped men and women throughout our Nation may be located and advised of the benefits to which they are entitled.”

1951: World Confederation of Physical Therapy has its first meeting in 1951 in Copenhagen, Denmark

1954: S 2759 signed into law by President Eisenhower provided expanded rehabilitation services under the direction of the Office of Vocational Rehabilitation, as well as provided for financial aid to institution which train personnel needed in physical rehab

December 1959: Dr. Catherine Worthingham presented to a group of physical therapists, emphasizing the importance of research “as a factor in the growth of any profession”

1969: New York, Vermont, and Massachusetts start utilizing two-way radio conferences to provide continuing education for physical therapists in 24 counties in their three states. They provided live, two way discussions between PTs and hospitals and was broadcasted through WAMC, the radio station of Albany Medical College

James Holmblad, MD and Clair DuBois ((Chief of Scoliosis clinic and Physical Therapist at Sunnyview Rehabilitation Hospital in Schenectady, NY, respectively) were the featured speakers in this revolutionary event.

Expanding Educational Opportunities across the State:

October 1960: Western District held institute in North Adams titled “The Cervical Spine, Cord, and Nerves” which focused on discussions about the normal cervical region, traumatic injury/disease in the area, and the brachial plexus.

The Western Part of the state has always made an effort to provide top notch Continuing Education - we look forward to seeing what they promote in our next 100 years!

1969: Physical Therapist Assistant Programs start graduating their first PTAs - the first two classes of PTAs graduate and enter the workforce from Miami Dade College in Florida and St Mary's Campus of the College of St Catherine in Minnesota

1977: Cape Cod District created, engaging members from the Southeastern part of the state with member resources and continuing education opportunities

May 1977: The first class of Master of Science in Physical Therapy graduates at Boston University (19 members)


July 1977: PT/OT departments at Boston University received 5 year grant to plan/implement a doctoral program in OT and PT (focusing on neurodevelopment and neurodevelopmental intervention) and hoping to admit first students in September 1978

Throughout the 1970's, the MA Chapter of the APTA was crucial in expanding offerings to ensure Physical Therapists stayed up to date on their practice. Below are some of the offerings: 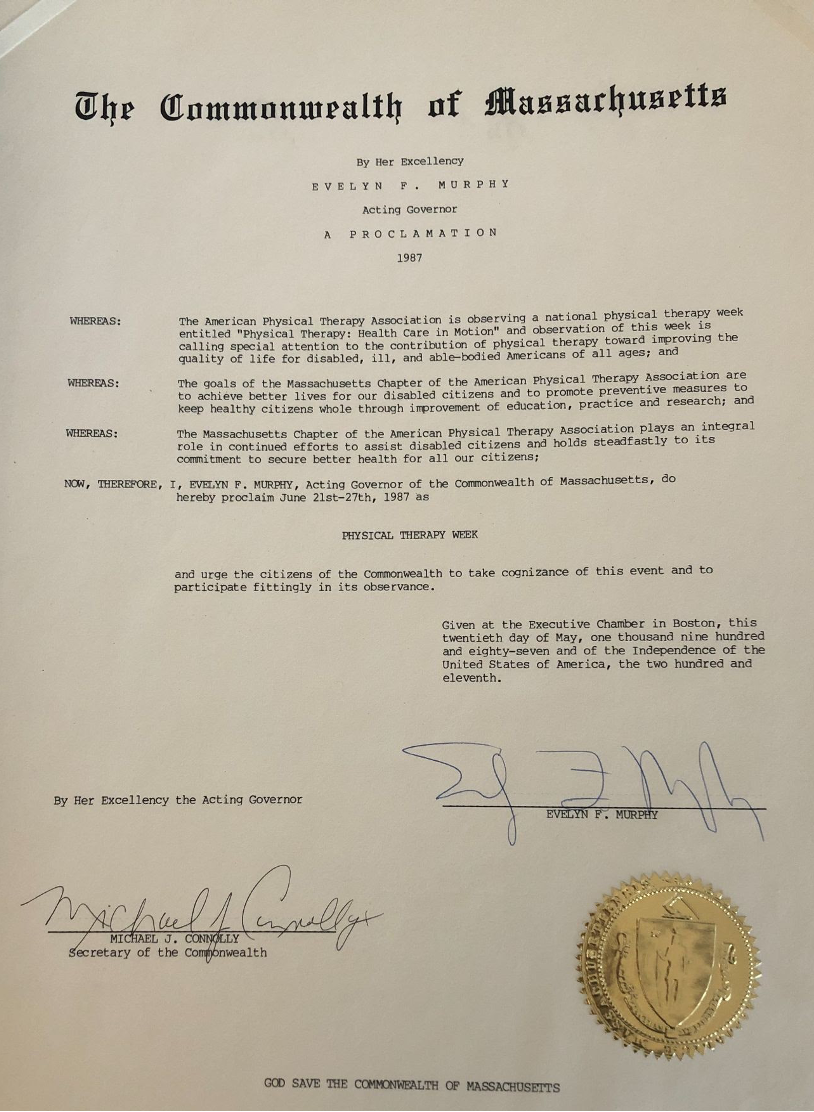 October 16, 1994: Inaugural session of the Assembly of Representatives of Massachusetts in Sturbridge, MA

May 6, 1995: Second meeting of APTA of MA Assembly of Representatives held at Northeastern University

April 27, 1996 = Fourth Session of Assembly of Representatives at Sheraton Hotel in Milford, MA

APTA Massachusetts Focuses on Connections with Legislators in the 1990s

2000 APTA of MA Goals and Objectives

2018: President Heather Jennings leads the APTA Massachusetts Board in Strategic Planning, partners with Amy Lafko to Reframe our Chapter's "Why"

"We inspire, engage, and empower you to reach your potential" 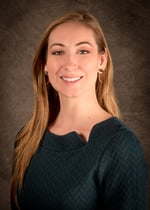 Pushed to rethink APTAMA's "why" statement, the Board of Directors met for the first of what would become an Annual Meeting, designed to:

This leadership event continues to occur every year. Keep an eye on our events page for upcoming information for our event this year!

What have we been working on recently?

Branding United: How APTA is rebranding its components, sections, and programs to reflect a common mission, vision, and purpose.

APTA Massachusetts was one of the first groups to jump on the opportunity to align our Chapter Branding with APTA's new logo. The logo's general shape pays tribute to multiple previous association logos—particularly in the use of a triangle shape, which can be traced back to the association's first logo from 1921. However, the mark also features contemporary design that evokes movement and hints at a more open, outward-facin

APTA's 3-year strategic plan includes an objective to "embody the APTA mission and vision through an integrated brand strategy," in order to help deliver on the goal to "maximize stakeholder awareness of the value of physical therapy."

APTA Massachusetts unveiled their new branding at the 2019 Annual Conference.

The COVID-19 Pandemic has affected all of us as individuals and as professionals. APTAMA is proud to have kept our members (and all clinicians) up to date at the changes that happened, at times hourly, that impacted different settings of care. We were proud to offer this to all, and not just our membership. Highlights include:


We continue to support and serve you as we continue through this pandemic.

If you continue to have questions regarding COVID-19 and your practice, please reach out to our leadership.

This September, APTA Massachusetts leadership attended APTA's Centennial Celebration in Washington DC. This five-day event celebrated our past, recognized our present, and looked forward towards our future. Highlights included: 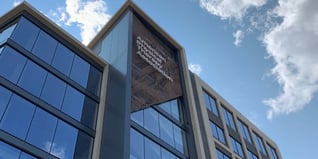 APTA Massachusetts looks forward to continuing to inspire, engage, and empower you to reach your potential in our next 100 years. We thank our members for their support, leadership, and service!